"Hey, I heard your radio ad"

We just launched a month of radio advertising here in Vancouver. Let me know what you think of the ads.


Chime in on our Facebook page and tell me your favorite from these two (or any other comments).

Our goal is to let customers know how easy it can be to order all your office and breakroom supplies from one site, and save the stress and aggravation of running out or "running out".

Cheers,
Calvin
Posted by Calvin - Chief Energizing Officer at 10:30 AM 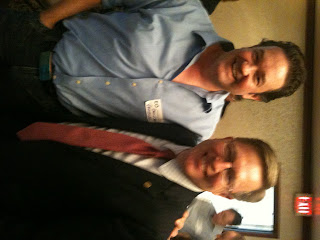 Yesterday Nabil, Shawn and I were in Victoria to meet one of my business heroes, Verne Harnish.
Verne is one of the founders of EO - a global network of 8000 business owners in 38 countries. I've been a member for 11 years and this is the first time I've been able to see Verne live.
The three of us spent a few days in Victoria on other business, and a full day with Verne courtesy of my friends in the EO Victoria chapter. We have used many of Verne's ideas over the years and read his books, so it was great to see him in action and to expose my two top VP's at the same time. 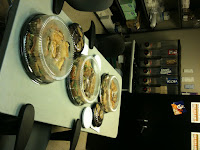 The day was a fire hose of ideas, concepts, best case stories, lots of book recommendations and exercises. With over 100 entrepreneurs and top level people in the room, ideas were flowing fast. A highlight for me was addressing the room about how we offer free breakfast, lunch and dinner to our staff - something Verne picked up in an earlier conversation we were having together and called me out to share the success we have had with the added benefit.
Last night we came in late from Victoria and I am in Richmond this morning to see Verne - again.
﻿﻿
﻿﻿
I was given a special invite by my uber successful friends Ken Sim and John DeHeart, the founders of Nurse Next Door, to sit in on their Franchise Summit today. Our warehouse, purchasing and call center managers came with me so they too could be exposed to the ideas and concepts Verne teaches. Within the last 48 hours we have aligned our management team to row in unison. Something you can never be doing enough of in business.
Posted by Calvin - Chief Energizing Officer at 10:00 AM

Steve Jobs death really hit me. Much more than I thought it would.
When you think of mentors, I used to think of someone I had a personal relationship with and we sit down every month to discuss the business at hand.
I have and have had several mentors - but what about a mentor you have never met? Living or dead? Someone you can look up to and when decisions are hard to make and you could say “ what would so and so do?”
In my eyes, I see Steve Jobs as one of my mentors. Thanks Steve for inspiring me to be great, to stay hungry and stay foolish.
If you have not seen Steve Job’s 2005 Commencement speech at Stanford please be inspired and watch what is considered the best commencement speechs ever given and reflections on life.

If you would like to read the speech, here you go:

I changed my title years ago to Chief Energizing Officer and personally I make a concious effort to add a bit of joy and laughter to at least a few people I work with every day. My thoughts on how you build a strong company culture is to make every day have a little bit of fun in it when you come to work.  My theory is that if I set the tone, others will follow.

At Costless you'll see theme days, celebration, lots of crazy hats, decorations and cool little toys on peoples desks. Most of these things are gifts staff give each other in an effort to bring a bit of fun and happiness into the office. So when I saw this MR BILL doll - I had to surprise Bill in accounting. 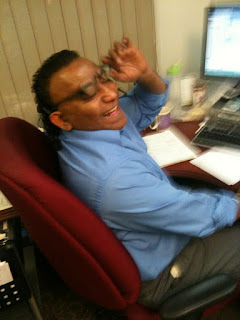 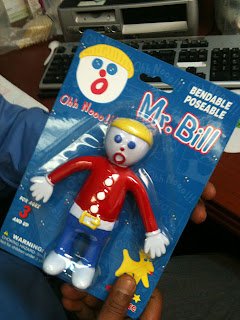 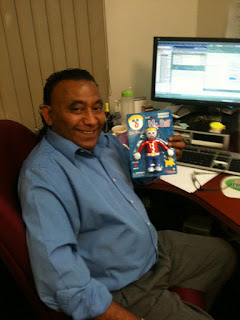 I Have The Power to Make Me Happy!

Posted in my office is this saying: 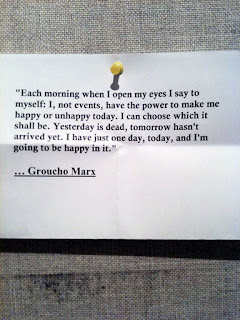 Let me tell you the story where I saw this saying. 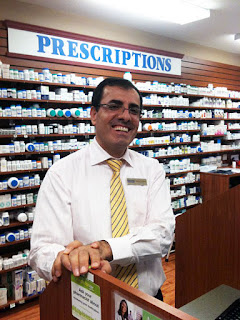 I was picking up some supplies at a local pharmacy near my house one day and saw this sign posted next to the check out till. It was located in the Peoples Pharmacy (12005 - 208B Street, in Maple Ridge BC) and Sayed Atthari is the manager of the store.
Every time I have entered Sayed's store I'm treated with a great big smile and he has a way of making me and all his customers feel special - just like a friend. Old fashioned hospitality is how I can best describe it. He is just a truly happy guy.
While paying for my purchase I commented on the sign and how I could really relate. Sayed did something next that blew me away - he reached below the counter and pulled out a printed copy of the saying and handed it to me. He said he gets comments on the sign all the time so he decided to make copies and "spread the good words".
Thank you Sayed, I read that saying now almost every day and have spread copies to many other people I know. Your small sign has made a huge positive ripple in the world.
Cheers,
Calvin
Posted by Calvin - Chief Energizing Officer at 4:02 PM