June 12th was Coquitlam’s 22nd annual Teddy Bear Parade, and our EcoYike ran as one of the floats! City Councillor Selina Robinson rode our EcoYike, accompanied by Gumby (actually Calvin in a not-so-secret disguise)


We even made it into the Coquitlam Now: Coquitlam’s Teddy Bear Parade delights the crowd
Posted by Erin the Graphics Gal at 2:34 PM

A cop's story from the front lines of the Vancouver Riots.

I'm here at a conference in San Diego and have tried to follow the stories about the riots in Vancouver. Thankfully I have not seen much news about this embarrassing and sad event down here.

This week I met so many people who commented that they loved Vancouver and what a lovely city we have. I was humbled and so proud to be from Vancouver and made sure when I introduced myself I mentioned where I was from. But today I held back mentioning I was from Vancouver. I am just so saddened.

Read this amazing post that was emailed to me about a VPD cop and his riot story.

Amazing things happened all night. Normal Citizens jumping in to help us.

Without being ordered to, many VPD members (the few that weren't working) came to work, geared up, and went looking for work.

We had cops with no helmets, no special gear of any kind, standing just behind us, and guarding our flanks, really putting their asses on the line.

Delta, New West, tonnes of Mounties, including the lower mainland tac troop for the mounties all played their role.

I have a great memory of being at about Robson and Hornby Street, feeling exhausted and not knowing how much longer I could keep going then looking behind me and seeing a wall of RCMP tac troop members stepping past us to take up the advance.

Our ERT members deployed on foot, with all their gear on their backs, and walked the lanes, flushing looters out of the Bay even as the building was on fire.

Our mounted squad did an amazing job, as with our dog handlers and mountain bike guys.

Our medics from the BC Ambulance never backed down, and stood by with us through the whole night. Vancouver Fire probably put out more fires that night than in the previous year.

The interservice camaraderie was awesome, all night our guys were pumping each other up, encouraging each other, slapping each other on the back, a well timed word of encouragement here and there kept guys going when they wanted to quit. Shouts of "VPD!" coming from the mounties and munies as we dragged our sorry asses to the rally point at Nelson and Granville brought tears to my eyes.

As were were all standing down at about 02:00, downtown Vancouver was being policed by a hodge-podge of mounties, Abbottsford, Port Moody, and West Vancouver.

The total losses look like the 10 to 20 stores looted, 20 police cars destroyed, about 10 police officers injured. Dozens of fires, dozens of privately owned vehicle destroyed too.

Here is a story that really made me think. Do we just cruise thru life on auto pilot? Why don't we stop an appreciate the little things in life more?

I know personally that my life has become so complicated and fast paced over the years. I do try to live in the moment and am sensitive to not flying on auto pilot... but... I don't know if I would have stopped in that subway either.

I promise to live in the moment and look for beauty "keeping my radar on high".
Would you have stopped to listen in that subway?
Posted by Calvin - Chief Energizing Officer at 4:38 PM

Check out where I'll be during the Hockey Game on Saturday! 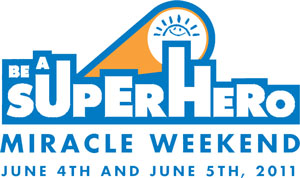 This town has gone crazy for the Canucks, and Saturday will be a day to remember as we win game 2 of the Stanley Cup Finals. But did you know the Canucks are also one of the BC Children's Hospital's biggest supporters? And did you know what else is happening on Saturday during the hockey game?

It's the 24th annual BC Children's Hospital Miracle Weekend (June 4-5, 2011), a celebration of hope, courage and remarkable people (aka Superheroes) making a difference. I have joined in this year, and will be sitting on the Miracle Maker Panel, raising money to provide the best possible care to children across the province. Please donate now and help sick children in BC.


This year I am honoured to be the Chair of the Retail & Wholesale Committee. Please tune in to Global TV on Saturday at 7pm to see the kick off of the BCCH Miracle Weekend when we announce the amount our committee raised this year - our goal was $4.9 million. Did we beat it?


Please visit my Superhero Page and place a donation to help make this Miracle Weekend the biggest in history, as we charge towards our goal of building a new hospital and helping even more sick children.

BREAKING NEWS!
CALL ME ON AIR AFTER THE HOCKEY GAME AND MAKE A DONATION!
Or click here now to donate.
Amounts over $20 will automatically generate a downloadable tax receipt.
Date: Saturday, June 4, 2011
Time: 9:30 PM - 11:00 PM


Please join me in making a difference.
Thank you so much,
Calvin Johnson
2010/2011 Chair - BC Children's Hospital Foundation Retail & Wholesale Committee
Posted by Calvin - Chief Energizing Officer at 10:00 AM