Sometimes life tests you to do the right thing, and today was no exception. We filled up our boat with gas at a small dock on Shuswap Lake and the experience did not go smoothly. The dock and old gas pump are part of a restaurant on shore. There was no attendant on the dock or any signs, so we were unclear how to purchase gas. After wandering around the docks and then up to the restaurant we were told someone would come turn on the pump. It took a while but a young guy came down and got things started. He was a local kid and the dishwasher at the restaurant. He said the restaurant had been very slow this season, and the few staff who still had jobs were doing double and triple work.
After our fellow completed filling our tank, my wife followed him up to the restaurant to pay. While she was gone, I looked at the old gas pump with the rolling style numbers and noticed it read - $81.76 and 124 litres. Hmm, that's a great price for gas at 65¢ per liter. There must be a mistake, it should be $181.76 ($1.46 per litre). I bet dollars to doughnuts the kid will read it wrong and under charge us. So when Sandy came back, I asked for the receipt - yup $81.76 - the kid under charged us $100.
I decided to go up to the restaurant myself to sort it out. I didn't want the kid to get in trouble, after all I was the one distracting him with questions about his summer and the restaurant while he filled us up. 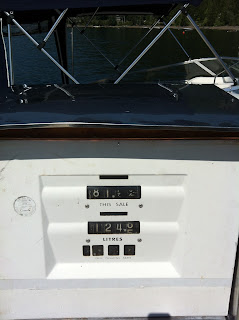 At the restaurant, I hunted down the owner and explained the situation, making sure to note the kid made an easy mistake. But it was the reaction form the owner that really caught me off guard. He explained how things were tight, and losing $100 from the bottom line would really ruin his day. He was choked up, and thanked me for taking the time to correct the mistake - "Most people would just drive away," he said.
Back at the boat, I told Sandy about the owner and how good it feels doing the right thing. My 2 boys who were on board were taught a valuable lesson too, I would say.
Now for my confession... something people close to me know about me. Systems - I love systems in business, and when things don't go according to systems, I get a bit irritated. That was my motivation to see the owner - To let him know he has a BIG hole in his gas bar system. It's just my nature. I would have never considered driving away without paying, but it sure did feel good after knowing we did the right thing.
Now I wonder if I could go back to the owner and draw out a better system on how to make his Gas Bar more efficient??
Cheers,
Calvin 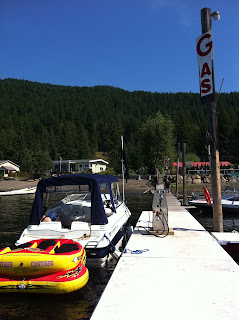 Posted by Erin the Graphics Gal at 8:00 PM

Something most people don't know about me is that my wife and I have our birthday on the same day. OK, she is younger in years but June 21st is a birthday I don't forget. We sometimes keep things low key and other times one of us spoils and surprises the other with something special. This was my year to be spoiled. 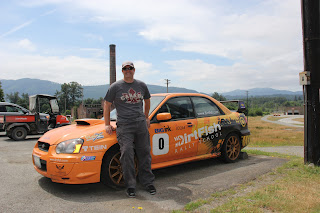 My present was an advanced multi-day driving course at one of the top Rally Car schools in the USA. Amazingly, Dirt Fish Rally School is a mere 5 hours from Vancouver in Washington. My topic for this blog post is not about sliding 400 horsepower cars around mud tracks at high speed with a HUGE grin on my face, it's about hiring great staff.

Dirt Fish solved a lingering issue we have been pondering in our business. Let me explain. The instructors at Dirt Fish were just incredible, incredible brand ambassadors, teachers, sales people and all round nice guys that made the students feel welcome and at ease. Most of all Dirt Fish has found exceptional rally drivers with a passion for their sport and craft. 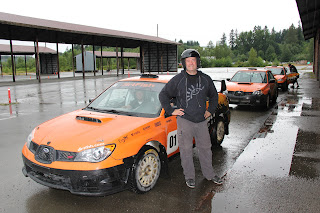 I think we could learn something from the Dirt Fish staffing model when hiring. They have found staff with "Will and Skill", People with passion and purpose. Staff who live the brand and love where they work. If you have heard the term FLOW, they are living it all day.

Leaving Dirt Fish after an exhausting but exhilarating several days I thought about how others perceive where they work, are they ever in FLOW, truly working happy in an inspired environment like the instructors at Dirt Fish? And how could we improve our company to create more of that kind of environment. For the drive home I had just the audio book to help answer that question - DRIVE by Daniel Pink. I'll keep you posted on what I learn and implement.

Cheers
Calvin
Posted by Erin the Graphics Gal at 8:00 PM

Away from sunny Vancouver this week and off to Washington DC for the SP Richards supplier conference. This year I have Nabil, our VP of Finance and Operations, with me for a jam packed five days of learning, socializing and some R&R.

The conference is a highlight in the office products industry and brings together thousands of independent stationers and suppliers. Together we share information about customers, the economy and technology. This year, it felt like there was a focus on "grass roots," back-to-basics service and selling. Service and relationships with customers seems to be the main thrust right now in differentiating small companies from the large national players in the office products industry. Over the past several years the focus has been on technology and social media and although it's vitally important office products dealers master these skills, they are not the differentiators against big box competitors that service could be.

Washington was a welcome destination for a conference and a city I had always wanted to visit. Nabil and I took advantage of our down time by getting away from the massive Gaylord National complex we were staying at and visiting many of the famous sites "DC" has to offer.

A few highlights for us were Alexandria - one of the oldest cities in America, preserved like a flash back in time, and the Smithsonian Air & Space Museum - simply amazing is all I can say. Did you know there are numerous Smithsonian Museums in DC and all are free to access?

DC was... inspiring for me. My take away learning was to continue focusing on innovation and the future while respecting and learning from your past.

Posted by Erin the Graphics Gal at 8:00 PM 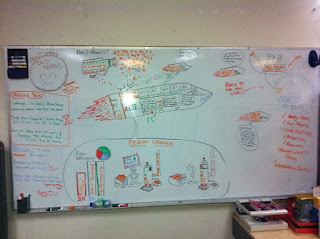 Seems my artistic talents are not ready for the art gallery but the staff seemed to love the white board session I held today.

The story time we had today was about a rocket ship that ran on orange juice. We all were responsible for squeezing the oranges to keep the ship moving faster and faster to our goal of the New World!!

The idea was to cement everyone around the concept that this company is run by a group called WE and not ME. We all matter and when some people are not giving their 100% it can effect all of us and the outcome of our goals. Like in any business we all want to come to work and be surrounded with others who are pulling their weight and contributing as much as you are. If a company does not set the standard for excellence then it will be the A players who leave because they are working with C players. 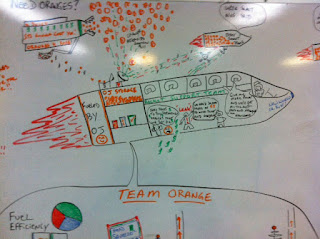 This fun session was a way to show as a company we are all on the rocket ship together heading to a new exciting future and we only want people on the journey who love getting up every morning for the ride and the reward. This is something we talk about a lot at Costless - if you are not happy, it's ok to find a place where you can be happy. We always want to have this discussion openly and boldly with all our staff and in return our staff feel open to let us know what we can do to make their journey here at Costless the happiest it can be.

I wouldn't have it any other way and I would be heart brokered to know a staff member hated coming to work at Costless every or any day. We just want to Work Happy.
Posted by Erin the Graphics Gal at 10:00 AM