Express Copy is back! 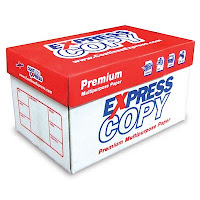 Our Express Copy Paper is back after a short hiatus. This is our 4th version of our popular house brand paper as we increase the brightness to 96 Brite. 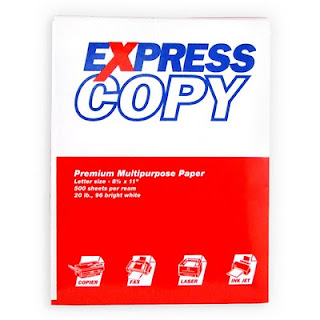 Over the years, the brightness of our Express Copy has increased from 84 Brite - 88 Brite - 92 Brite and now 96 Brite.
Our Express Copy Paper is a premium everyday sheet for use in all machines. We are excited to offer Express Copy at $39.96 per case - (The comparable paper would be Staples Brand Red Box Paper at $46.96.)
We are also happy to announce that partial proceeds from the sale of Express Copy will be donated to BC Children's Hospital through our charity The Smile Project.
Cheers,
Calvin
Posted by Calvin - Chief Energizing Officer at 1:30 PM

Say Hello To Our New EcoYIKE! 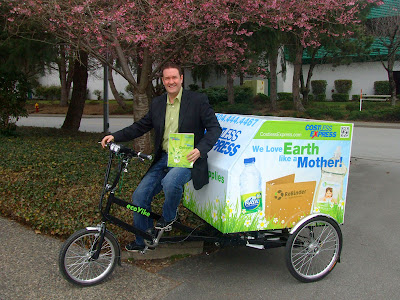 ﻿
What's an ecoYIKE? It's our new hybrid human-electric-solar powered delivery vehicle that you'll soon see in the bike lanes in Downtown Vancouver!

We've even been written about in The Province!

Read our full press release below!

It's such a handy vehicle, you can almost go anywhere.
Because our EcoYIKE is electric (no noise, no pollution, no CO2 emissions) we have been granted access to Vancouver's new bike lanes. As a result, we're able to make fast efficient deliveries even quicker than a car or truck...it's the ultimate urban delivery vehicle!
Thanks to this mode of clean parcel transportation, Costless Express is also improving its day-to-day business efficiency by 20-50% higher per delivery compared to current fleet of vehicles. End-customers are even more closely connected to the Costless Express brand and core values on the environment once they see our EcoYIKE in action. So, it's an advantage in terms of visibility and client communications, and in terms of finance and productivity. Everyone loves the EcoYIKE!


We started the EcoYIKE project September 2010 and spent several months refining the reliability and length of service on a charge. Our recent break thru solution has been to add 3 high efficiency solar panels, making the EcoYIKE fully autonomous (never needs to be plugged in- even on a cloudy day).
Our EcoYIKE is started manually and then an electric motor kicks in. The motor is quiet and powerful and allows us to reach a comfortable speed. The capacity of the EcoYIKE cargo box to carry our signature red Costless Express plastic delivery totes (no cardboard here!) is impressive. Our emissions-free EcoYIKE works in all weather but our drivers are happiest on one of our trademark sunny Vancouver days of course!
The EcoYIKE represent a new class of vehicle, between a 40 lb. bike and a full size delivery truck.  This EcoYIKE design weighs only 215 lbs., yet can carry an unprecedented payload of 600+ lbs (227Kg), leading to very high efficiency ratio.  This means that the majority of energy is spent moving the payload, and not the vehicle.
There is a "golden ratio" for vehicular efficiency, that is, vehicle weight / cargo weight.  A typical truck that weighs 8000 lbs., and often carries 2000 lbs. of cargo around town, comes in at "4″.  That's obese!  One wants to get the ratio below "1″, where the cargo weighs MORE than the vehicle.


As a locally owned business and like most Vancouverites, we consider the environment to be a major concern -all the more reason for Costless Express to continue its environmental impact reduction policy. Costless Express is the first carbon neutral office supplier in Canada and our main strategy is to cut off 20% of our CO2 emissions and the EcoYIKE is a crucial element in order to achieve this goal.
Based on the early success and positive customer feedback over the past few months, Costless Express aims to raise the number of ecoYIKE's to five before the end of the summer. Each delivery with an EcoYIKE represents a carbon reduction of 5.33 pounds of CO2 compared to our current delivery trucks.

"It's Easy Being Green"™

Posted by Calvin - Chief Energizing Officer at 9:49 AM 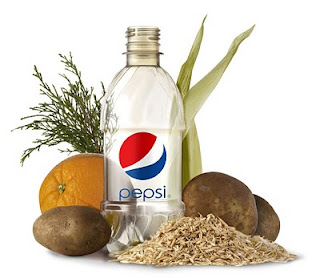 Pepsi has been a great partner of Costless Express for 21 years. We are very excited to be the first supplier in Vancouver to offer the new Plant Based Bottle when it hits our market. This innovative packaging completely fits with the core values of our company to offer sustainable products to our customers.

Pepsi isn't just making a killing off of the past — it's also banking on the technology of the future with a new plastic bottle made completely out of plant material.

The company claims it has "cracked the code" on a first-of-its-kind bottle made from switch grass, pine bark, corn husks, and other materials, and it purportedly looks, feels, and protects the drink in exactly the same way as traditional plastic packaging. It beats out the carbon footprint of competitor Coca-Cola's PlantBottle, which is only 30 percent plant-based.

Pepsi is even thinking further ahead: in the future, it plans to use orange peels, potato scraps, and other leftovers from its food enterprises in its new plastic bottles.

PepsiCo says it is the world's first bottle of a common type of plastic called PET made entirely of plant materials. Coca-Cola Co. currently produces a bottle using 30 percent plant-based materials and recently estimated it would be several years before it has a 100 percent plant bottle that's commercially viable.

PepsiCo announced the discovery Tuesday and said it plans to test the product in 2012 in a few hundred thousand bottles. Once the company is sure it can successfully produce the bottle at that scale, it will begin converting all its products over.

That could mean a switch of billions of bottles sold each year. Of Pepsi's 19 biggest brands, those that generate more than $1 billion in revenue, 11 are beverage brands that use PET.

Scientists said the technology is important innovation in packaging.

"This is the beginning of the end of petroleum-based plastics," said Allen Hershkowitz, a senior scientist with the Natural Resources Defense Council and director of its waste management project. "When you have a company of this size making a commitment to a plant-based plastic, the market is going to respond."

Coca-Cola said it welcomed other advances in packaging, but noted that it has scaled up use of its own plant-based bottle since introducing it in 2009. It also says it has demonstrated a 100 percent plant bottle in the lab and is still working to ensure it is commercially viable.

There are other plant-based plastics available or in development, but Herskowitz said these are not environmentally preferred because they typically use plants grown solely for that purpose rather than using the estimated 2 billion tons of agricultural waste produced each year. And these alternative plastics cannot be recycled.

PET plastic is a go-to material for packaging because it's lightweight and shatter-resistant, its safety is well-researched and it doesn't affect flavors. It is not biodegradable or compostable but it is recyclable.

A completely plant-based PET could change the industry standard for plastic packaging. PET is used in beverage bottles, food pouches, coatings and other common products.

Pepsi, based in Purchase, N.Y., said it has had dozens of people working on the process for years. While PepsiCo wouldn't specify the cost to research and design the new bottle, Papalia said it is in the millions of dollars.

Posted by Calvin - Chief Energizing Officer at 9:39 AM

Labels: Calvin, It's Easy Being Green

Recently we had a tour of our offices by the CEO and COO of Suntech Optics & Bugaboos Eyewear to see our culture at Costless Express.

We host tours for companies who what to learn more about what has worked for us at Costless Express (and what hasn't worked). It's a highlight for me to be able to share and learn from others who are passionate about creating great cultures and businesses. Readers of my blog will know about how we enjoy the concepts of Tribal Leadership, but there is another book and author we equally gravitate to. Chip Conley - PEAK.

Here is an upcoming webinar with Chip hosted by our good friends at Rypple (great software) so please sign up to hear Chip if you are interested in adding some MOJO to your companies culture.

Posted by Calvin - Chief Energizing Officer at 11:48 AM

It cleans and sanitizes using nothing more than electricity and ordinary tap water! Well, it's a bit more complicated than that, so perhaps Bill Nye the Science Guy can explain it for us:

The Ionator can replace dozens of cleaning compounds, many of which can be bad for your health or for the environment, with something that's safe, non-toxic and renewable. And because you're not buying bottle after bottle of chemical cleaners, it can represent a huge long-term savings!

Looking for more science? The Toxics Use Reduction Institute at the University of Massachusetts Lowell included the Ionator in its guide Cleaning for Healthier Schools. There's also more at the ActiveIon website, including reports from their sanitizing studies.