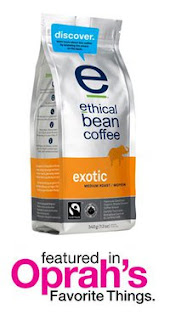 Ethical Bean Coffee is featured in the December edition of O Magazine as one of Oprah's Favorite Things gift list. And no wonder - it's great coffee, fair trade and organic, and roasted right here in Vancouver. (You can buy it through CostlessExpress.com in whole bean bags and pre-ground portion packs. You can think of it as a gift to your breakroom!)

The boost won't just help a local company that we're proud to do business with. Partial proceeds from their coffee sales this December will be given to the Ethical Bean Guatemalan Scholarship Fund, which helps Guatemalan children to attend school, and Project Somos Children’s Village, a Vancouver-based charity that helps orphaned and abandoned children in Guatemala.

Read more about it on Ethical Bean's blog here.
Posted by Erin the Graphics Gal at 4:25 PM

Would be bride donates reception to homeless

I saw this story and had to share about a young woman in Colorado who had her wedding called off days beforehand. With a reception room booked and catered and not enough notice to cancel, she decided to do the most beautiful thing. She contacted the Salvation Army to organize an early holiday meal for a local homeless shelter.

This woman took a heart-breaking life event and turned it around into an amazing and selfless gesture.

When life tosses you lemons, make lemonade is my motto.

Posted by Calvin - Chief Energizing Officer at 9:44 AM

Even the mighty Zappos was not immune from the economic downturn and they laid off 8% of their workforce in October 2008.Since then, they have hired back and increased their head count to almost 1400.

Now in 2010, since Amazon has bought and owned Zappos for about a year, I have heard headcount is being tightened but that could just be due to the synergies with having Amazon as your big brother.

We had stopped in the cafeteria when this was filmed. Here Zappos employees are offered free snacks and drinks as well as basic sandwich fixings. After seeing this I immediately introduced this at Costless Express. We now offer all our staff free breakfast, lunch and dinner. The staff love it and it can save someone several hundred dollars a month.

Posted by Calvin - Chief Energizing Officer at 10:17 AM

Donavon tours us past the very cool BLOG BUS. Who decorates this stuff?

Then it gets even more crazy when we walk past the HR department. Now remember there are 4-8 tours a day thru Zappos so imagine hearing Eye Of The Tiger that many times a day, every day, and still have a smile.

The people are genuinely happy and love being a bit weird. It is infused into them.

Have a look.
Calvin

Posted by Calvin - Chief Energizing Officer at 10:13 AM

Here is the epicenter of entreprenurialism - Monkey Row.

In true Zappos fashion, the offices are open concept even for the executive team.

Down Monkey Row is where Tony, Alfred and other key executives sit.

I had seen Monkey row in the pages of Fortune Magazine and on CNN business shows so to be here was like a sports fan standing on home plate at Yankee Stadium.

A highlight for me!

Posted by Calvin - Chief Energizing Officer at 9:46 AM

Did you know tomorrow (Saturday, November 13th) is World Kindness Day? Do a good deed for someone (Here are a few suggestions) and help spread the word!
Posted by Erin the Graphics Gal at 9:26 AM

We are all here for a reason

What an amazing set of circumstances. Have a look at this story out of France that happened today.

We have all made an incredible difference in the lives of people around you and people you may not have even met. Take a moment to think about something you did that may have changed the life for someone else. It may have been small for you but HUGE for someone else.

Last summer our family was out boating on Harrison Lake and I saw two people in the water next to a Sea-Doo water craft. I steered the boat closer to just see if everything was alright and as we came up on the couple we could see they were in distress. The man was holding up a girl who couldn't swim and she was in total panic. They went under the water several times and their life jackets were not buoyant to hold them up. We were able to pull them aboard and got them to shore. The man had taken a Japanese exchange student out for a ride and he didn't know she couldn't swim. He said they were in the water for 10 minutes and he was at the point where he had thought of letting her go because she was going to drown them both. She was crying and upset because of the situation but luckily didn't understand what he was telling us. She had no idea her life was that close to ending. I think about those two people often and I know their contributions to the world and other lives would be missed if they were not alive.

Christmas is soon and my favourite movie "It's a Wonderful Life" is a tradition. It really grounds me and gets me thinking about the year and how things in the world would be different if I never existed. Or if my wife, mother, or even staff never existed. We all make a difference every day - positive or negative.

Posted by Calvin - Chief Energizing Officer at 11:23 AM